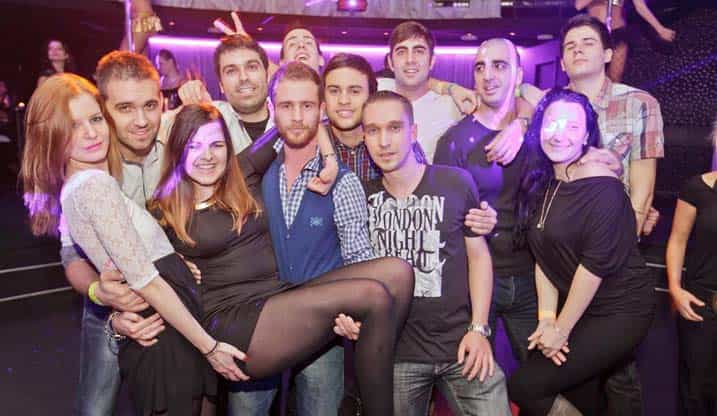 The big day is quickly approaching and time is ticking away on the lead up to the big day, unfortunately a plate of cocktail sausages and pints at the local just ain’t gonna cut it for your best mate’s send off. Here at The Stag’s Balls HQ, we’ve created this handy list of the top stag party destinations in Ireland to help you decide where the stag will experience the send-off of all send-offs. Whether you want to quench your thirst in some well renowned Irish watering holes or test some extreme sports off the beaten track, here are the top Irish stag party destinations that should have you covered from all angles:

This unlikely Leitrim town punches well above its weight and offers a hell of a lot more than waterways and boat rides. It is currently the uncontested stag and hen party mecca in Ireland. This resort town is no stranger to blow up doll toting hen parties so your stag party will never be shy of a few cheeky chicks to party with over the stag weekend. While one of Carrick-on-Shannon’s top activities for hen and stag parties is the 50/50 booze cruise that never disappoints, this town naturally caters to all of the favourite stag and hen party activities like paintball, bubble football, karting, rage buggies along with other welcome newcomers like boda borg and football golf.

Like many Irish towns, Carrick’s allure is in part attributable to the massive density of bars and pubs that are all on the one street. How convenient is that! Throw in a massive hen and stag party in the most popular stag party destination and Carrick-on-Shannon won’t be bucked from the top spot any time soon. This Leinster gem has become one of Ireland’s top tourist destinations for it’s picturesque medieval fortifications and the cultural excursions to be enjoyed there, not to mention the infamous Smithwick's Brewery, a fond favourite among stag parties.

While its historic elements may have initially put it on the map, it’s because Kilkenny’s locals are such undeniable craic that Kilkenny has a prominent spot on Ireland’s stag party map. Known for regular festivals throughout the year and the odd ceili session for snug loving stag parties, Kilkenny also offers some of Ireland’s best white water and rough woodland to cater to all your stag party’s dream, extreme sports. Galway is known for being one of the most naturally beautiful cities in Ireland with its scenic bay and famous sunsets over the wild Atlantic. While we doubt that’s the main incentive for Galway stag parties, it can’t hurt to have that backdrop over pints as you warm up for the stag night out.

With tonnes of watersports to enjoy in the famous bay, a quick spin will take you out to Ireland’s outback where lads on the stag party can embrace their inner Bear Grylls and tackle some of Ireland’s wildest outdoor sports. And when you are done taming the Wild West, tame your thirst in Eyre Square. A Galway stag party provides all the perfect components for a masterclass weekend. The wild and wonderful Westport stag party has increasingly grown to prominence over the past few years. This is in part due to the incredible range of activities that you get with rugged territory and the great allure of a night out in a welcoming tourist hotspot, with Irish snugs galore. While the popular stag party town is also famed for its close vicinity to Croagh Patrick, you can always repent your stag party sins from the epic night before… or at least go on a hike to shift the inevitable stag party hangovers. A Dingle stag party offers as much to party enthusiasts as it does to dolphin fanatics. While Kerry may be known as the kingdom of Ireland, if this is the case then Dingle is certainly the jewel in the crown of the Kingdom. Strategically located, Dingle’s just a quick spin from the ring of Kerry, the wild Atlantic and is an unbelievably epic backdrop to all your stag party activities. There’s no shortage of things to do on a Dingle stag party from extreme sports on land and by sea. If you choose to stay within the town of Dingle, then you won’t be left idle either with the massive amount of tasty eateries and popular pubs to tee you up nicely for an amazing stag party weekend.