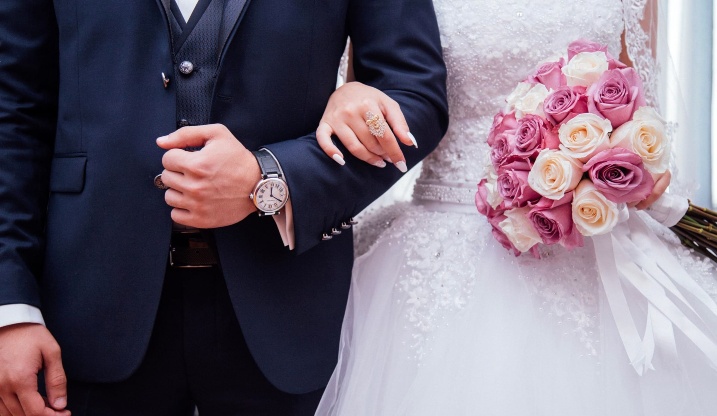 Being asked to give your daughter away is one thing, but when you team that up with having to make a father of the bride (FOTB) speech, even the most confident Dads can feel the panic set in.

Luckily for you, we’re here to help you navigate down the path of how to write a father of the bride speech to rival all others and in a way that suits your own style. Here’s everything you need to know about what to say, who to toast, and how to make your daughter proud.

Traditionally, the father of the bride speech comes first. After you, it’s the turn of the groom, followed by his best man. This means you’re pretty much the support act before the headliners come on stage. However, that doesn’t mean your speech isn’t of equal importance. After all, you’ll be setting the tone for what comes after and have the job of thanking many of the main players.

Despite this, your speech needn’t be complicated. A simple father of the bride speech can have all the necessary elements rolled into one without being overly dramatic or mushy.

What To Include In A Father Of The Bride Speech?

A simple speech introduction will break the ice and ensure everyone’s attention.

Once you’ve set the tone with a gentle joke about your daughter, you then have the responsibility of working out who to toast. First up is usually a thank you to the guests for attending, paying particular attention to anyone who’s travelled some distance to celebrate with your family.

You should thank the groom’s parents and the wider family to welcome them into the fold.

It’s customary to pay tribute to absent friends and family before giving special mention to anyone involved in the organisation of the day. This includes catering and venue staff, florists, and anyone else you think should be included.

Keep this section short but heartfelt, especially in terms of absent friends and family. Although they should be included, it’s important not to dwell on this portion and bring down the mood in the room. It’s a day of celebration, so just touch on those who were unable to make it and move on.

The final toast will be for your daughter and her new husband and will follow at the very end of your father of the bride speech.

A Tribute To Your Daughter

When you’re considering what to include in a father of the bride speech, some sort of tribute to your daughter is the most important part. It’s also probably the easiest part to write. You’ve known your daughter her entire life, so this is your chance to reflect on that.

If you’re in the mood for a funny father of the bride speech, this, and the follow up section where you pay tribute to your new son in law, is where you can let loose. While you might want to poke fun at her in a kind way, you also want to give a heartfelt tribute to your little girl in the way only her Dad can.

Include some jokes about her being a difficult teenager, her celebrity crushes and, if you’re feeling brave (and your daughter won’t be upset), a line or two about past boyfriends. You can reference your fear when she left for college or uni, the terror you felt when she backpacked around the world, or just how weird it felt when she passed her driving test and picked you up from the pub for the first time.

From there you can move into telling her how proud you are of her (give examples of her achievements and unique characteristics) and move seamlessly onto toasting her new husband (see below).

Toasting Your Son In Law

You can welcome your new son in law to the family with a few jokes. This might be about how he’s now taking over the mantle from you on putting up with your daughter’s bad habits or quirky behaviours.

In addition to a few speech jokes, you will also want to give a serious tribute to the newest member of your family.

A Final Toast To The Bride And Groom

One of the most important parts of your speech is your toast to the couple as a single unit. You’ve spoken about your daughter and your son in law separately, so it’s now time to celebrate their union. This is often done by giving the happy couple some salient advice for beginning their life together.

If you’re looking for some inspiration, we’ve provided a few examples below of what you might like to say.

Once your advice has been imparted – and feel free to give advice based on your own experience of marriage and what worked for you – you can then draw your father of the bride speech to its conclusion. This is generally done by asking everyone to stand up and join you in raising a glass to the happy couple.

How To Write A Father Of The Bride Speech

Split your speech into different sections. These will be:

Follow this basic structure and write down what you want to say in each section. Once this is in place, you can start to go through your father of the bride speech and expand or subtract where needed.

The bulk of the speech will be dedicated to your daughter, then your son in law. Your icebreakers, thanks, toasts, and conclusion can then be adapted to fit around the rest. Check the structure to make sure you’ve got a spattering of humorous and sentimental moments.

If you feel you need some assistance pulling your father of the bride speech together, don't be afraid to ask for help. Turn to your daughter’s friends and other family members. They can often remind you of events you’ve forgotten about, or give you a new angle or point of view on something you’re considering including in your speech opener or wedding toasts.

A good thing to do is look through any souvenirs of your daughter’s life. This includes photos of when she was younger, clothing, toys, and the other memorabilia you’ve held on to over the years. This can be a great place to gain some inspiration.

Don’t think you can’t approach your son in law for some advice, either. Obviously, he’ll be speaking of his wife in his speech, so it’s best not to tell the same story. However, that doesn’t mean you can’t chat with him about some of the odd habits your daughter has, or maybe how she reacted to meeting his parents for the first time? He will be a mine of information about your daughter, so don’t think his advice is off-limits.

How Long Should A Father Of The Bride Speech Be?

You’re probably looking at a speech of around 5-6 minutes. If you have a lot to say, you’ll have to be brutal with what you leave out. You want to warm up the crowd without going on for too long or not saying enough.

It can be a difficult balance to strike but aim for the majority of your words to be about your daughter and son in law, with the remaining time spent between your speech introduction and icebreakers, before culminating with your conclusion and toast to the happy couple

To stick to your time limit, practice saying your father of the bride speech out loud. This will help you see how it flows, as well as give you an estimation of how long it’s going to take to get through it. Once you’re happy with everything you have to say, practice it on a friend or trusted family member. This will give you further pointers about how the content comes across. Plus, it’s always good to get an independent point of view.

Once you establish the timescale, write the main bullet points down and put them on cards. You can then use these during your speech to keep yourself moving forward and stop you getting side-tracked. It’s a nervous occasion, so going off on a tangent is easily done. If it does happen, or you get flustered, take a deep breath, try to keep calm and glance at your cards. These will help you get back on track quickly.

Wrapping It All Up

The majority of your time writing up your father of the bride speech will be spent thinking about the ways your daughter has made – and continues to make – you proud. Although you might be concentrating on her, don’t forget that, on this occasion, you want her to be the proud one!

Follow this guide, split the speech into sections and practice, practice, practice. Doing this will mean, by the time you come to give the speech, it should be second nature to you. You’ll be far more confident about giving a public speech if you know it inside out. You’re also way less likely to go awry.

Being prepared is the best way to ensure your father of the bride speech is memorable for all the right reasons. Simply keep calm, stick to the cards and, if all goes wrong, remember to just say how much you love her, make a toast to the happy couple and thank everyone for coming. Plan A and B sorted!