12 Ways to Kick Off The Stag Night Out 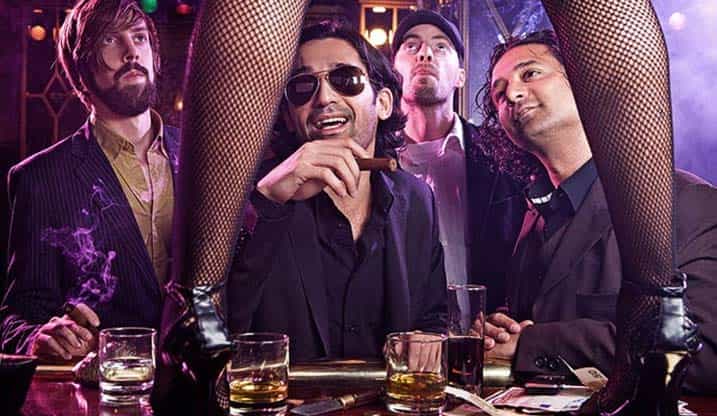 A massive stag night out and a number of intriguing clubs and venues will definitely be on the itinerary over the stag party weekend. What is in question, however, is what evening activities you have lined up for the run up to the stag night out? At The Stag's Balls, we know that there’s a high chance you’ll want to try out something different other than a few stag party casuals in the local watering hole.

Racking your brain for ways to kick off the stag night out? Check out our list below for some inspiration for the stag party night out: The poison of choice for a stag party evening of drink sampling may be dependent on your chosen stag party destination. Whatever destination your stag party will be travelling to, they’re going to want to test all the finest spirits that the region has to offer. With this stag party activity, your group will happily set off for the night out safe in the knowledge that they are now master connoisseurs. We offer many different tasting experiences from vodka tasting in Poland to whiskey tasting in Prague to even the less heard of, like Rakiya tasting in Budapest. A tasting evening makes for an unforgettable stag party experience. Unfortunately, we can’t guarantee that you’ll remember! Lads can get out their swanky suits and fine cigars with this evening stag party activity. A casino night is a smart and suave, yet alternative way to kick off the stag night out and we offer it in many of our stag destinations with access to some of the finest casino establishments in Europe. We offer variations like poker nights and our Casino nights do vary between destinations (some don’t include beverages) so be sure to check with our package builder about what your casino night entails. We can even hook you up with your own personal guide and guestlist entry for the stag party. The bets, however, are totally on you! A comedy club is another fantastic, popular and different way to kick off the stag night out, and with popular venues we partner with across many of our stag party destinations both in the UK and Europe. What better way to kick off the stag party night out than with a few beers and the lads pissing themselves laughing. From world renowned comedy clubs in Amsterdam to famous cabaret style comedy shows in Blackpool, it will take a pretty hardy stag not to burst into hysterics at some of the comedy nights we run to. Navigating uncharted territory on a conference style beer bike with a bunch of the lads and litres of beer is the exact type of bonkers activity stag parties were destined for. The beer bike is a great way to warm up for the stag night out and get acquainted with the city before you spend the rest of the night buried in some mighty fine bars and clubs. The best thing about this stag party activity is that you are getting in some excercise while still getting the drinks in. A win-win. This is a stag night activity that’s especially suited to German stag parties, a rowdy beer hall and a few mighty fine Bier Mädchen "beer maidens" are every stag parties dream come true. Some of the mighty beer halls that we run to are literally world renowned and make for a once in a lifetime stag party experience. Just make sure all the lads pack their lederhosen and learn the lyrics to Das Deutschlandlied if you’ll be kicking off the stag night out with a beer hall visit.

Check out our German destinations like; Munich, Berlin, Hamburg and Cologne for more information about this smashing stag party activity. Cheating is eating? This is a myth unless you want many of the lads on the stag party ending belly up by ten o’clock. It’s undeniably crucial to make sure that all the lads get their soakage before consuming the copious amount of booze they are destined to on the stag party night out. Our traditional feast option in many of our European destinations is an ideal way to do so. From bratwurst in Berlin to goulash in Budapest, our traditional stag party meal is a great stag party activity to include in your package. It is a way to sample the local delicacies and line your bellies before the big night out. Make sure to check out our stag party package builders for more information on our traditional feast options as they vary between destinations. As some options do include unlimited drinks, we’re sure you’re stag party will still manage to do some damage in the process. The Stag Arrest is certainly one of the most thrilling ways that we know to kick off the stag party night out, particularly on stag parties in greater Europe. This stag party activity can be incredibly daunting, espeically for the stag himself. He is kidnapped at random by two unknown assailants, bagged and brought to an unknown destination. Luckily for the stag, these happen to be sexy assailants and the unknown destination is a grade A strip club where the stag will be subjected to the show of his life, all while the stag party look on and laugh. Another totally alternative way to kick off the stag party night out, this activity doesn’t necessarily involve a lot of booze, but it most definitely involves bucket loads of jello. Two of our lovely ladies will endure a jello wrestling match of epic proportions before you chuck the stag in to endure his fair share too. Then when the stag won’t have a look in where our skilled wrestling ladies are concerned, this evening activity ensures unmatched entertainment for the stag party. As well as having an amazing time, another one of the main aims of the stag party night out is to embarrass the hell out of the stag. If the stag’s vocal stylings are anything like us here at The Stag’s Balls, then that task won’t be too difficult. Simply stick a pint in one hand and a mic in the other and stick him up on a podium to serenade the locals with any chorus of choice. Just make sure to bring some ear plugs when opting for this hilarious stag party activity. Treat the stag to two of a lad’s favourite things before the stag party night out. This is one of the most popular stag party meal options and we won’t argue. ‘Steak & Strips’ gets you a hearty steak for the lads to line the bellies for the stag night and also some remarkable entertainment to prepare the lads for the best stag night of all time.