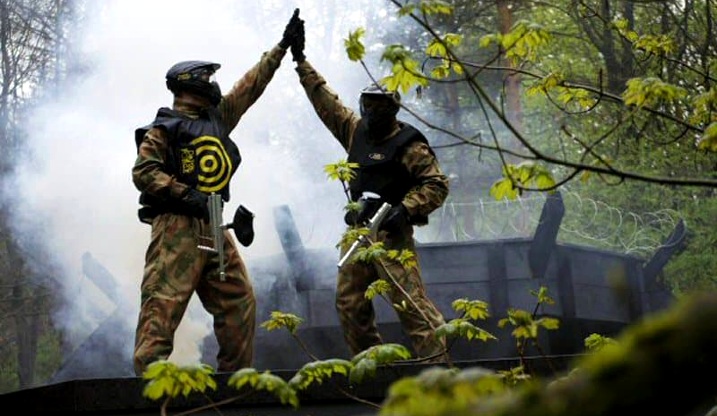 Since the day men discovered how much chaos and carnage could be unleashed on their best mates by booking stag party activities at paintball venues, they’ve been racking their brains to come up with witty paintball team names. After all, it’s pretty difficult to instil fear in the hearts of your opponents with a name like, ‘Big Dave’s Stag Do Team’, or something equally rubbish.

The perfect paintball team name for your group might well reference the stag night, or the stag himself, but it has to be witty and (preferably) memorable.

Alternatively, you can opt for paintball team names that reflect the entire squad. It might be connected to your favourite movie, band or, commonly, your beloved football team.

Nothing is off limits with it comes to the stag weekend, so why should your chosen stag activity be any different? Just make sure your paintball team name is something that can realistically be shouted out or pinned to a scoreboard. Otherwise, some random bloke on a day out with his kids might have to answer a whole load of awkward questions on the journey home…

These are our current stag do paintball team name favourites.

If one of your stag party ideas involved paintballing, we hope we’ve given you a heads up on some witty paintball team names for the troops. There’s plenty of choice for experienced and inexperienced teams, as well as those involving a mix or old and young.

What you’re looking for is a moniker that will go down in the annals of paintball team name history as the greatest. It would help if you’re quite good at it, though. No one remembers second place – even if they’ve got a good name.

You can book just an afternoon of stag paintball madness with us or you can book a whole stag party package for your lads weekend away. Check out our stag do locations in Ireland, the UK and Europe and feel free to ask us about our favourite paintball courses for some top recommendations.